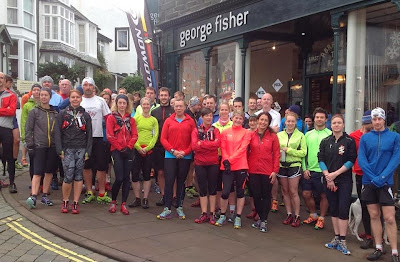 Another fantastic weekend in 'The Lakes' has left me, yet again, wanting more! After the success of the last Salomon 'Run with Ricky' demo trail run, I decided it was well worth attending the third and final event, held at George Fisher (for a full review of the last run please see the following link: http://caveman-clarke.blogspot.co.uk/2013/10/salomon-run-with-ricky-lightfoot-demo.html).

So, after the fun of the Kendal Mountain Festival, which I had been enjoying the day before, I packed my bags and headed to Keswick in hope of enjoying the event as much as I had done the last time I went. And I certainly wasn't to be disappointed.


I have said it before and I will say it again; it's the people that make these kind of events so successful. Yes, you need a decent product to trial and test, and Salomon certainly fulfilled this criteria with a selection of Speedcross 3's, Fellcross 2's, Fellraisers, running hydration packs and windproof jackets. But the people, from the friendly staff at George Fisher and the delightful ladies upstairs in Abraham's Cafe, to the Salomon team, the friends you make and of course, Ricky himself that makes the biggest difference! I, myself, arrived at the event with a new friend Faye who I had met at the previous 'Run with Ricky' event back in October. We had had such a laugh running together (and eating cake in the Cafe afterwards!) that we had stayed in touch and decided to go to the next event together. As soon as we entered George Fisher, Ricky and the Salomon team remembered us from the last run and came over to say hello. Top lads!

This time there was over 70 people who had come to try the shoes, clothing and be part of a fun trail run together with Ricky. The Salomon team certainly had their work cut out kitting everyone up with shoes and apparel, but after calmly working their way through the mass exodus towards the huge Salomon kit bags full of demo gear, we were ready to run. The route was similar to the previous event, but that wasn't a problem at all, as it involves all kinds of terrain and takes you through some breathtaking scenery. Knowing where we were off to I was excited to get up to the top of Walla Crag, via Derwent waters edge and a weaving uphill technical trail. It was at the steepest part of the run that Ricky trotted up next to me to have a catch up. This is where the difference between a World Trail Running Champion who trains on the trails in Cumbria, and an everyday runner who trains in the flat countryside of Cambridgeshire clearly came to light! As Ricky calmly skipped up the trail chatting away like we were relaxing in a pub with a pint in our hand, I was adopting the 'single word - breath - single word - breath' approach to conversation, with sweat dripping off the end of my nose! I'm usually the one to chat for England, but in this case I was struggling for words...and air! Sorry Ricky, you'll have to catch up with me on the down hills next time!


Over the top of Walla Crag, we descended along some beautiful trails back into Keswick, finishing back at George Fisher with a total distance of just over 11km. Awaiting us was a bacon sarnie, a free coffee in the upstairs Abraham's Cafe and a goodie bag packed with Salomon and George Fisher freebies. Another gear-geek fuelled chat with the Salomon team and some top quality banter with the George Fisher staff and Ricky, and the event was over.


It was a fantastic run and a brilliant event, and was enjoyed by all. It is yet again another memory I will cherish for a long time to come. It's not often an everyday trail runner gets to run beautiful trails with fellow enthusiasts, try top quality trail running gear for free and chat 'on the hoof' with a World Champion and top ambassador for the sport like Ricky Lightfoot. Experiences are quite often better when shared with others, and trail running is no exception.

And what better way to finish the event with a cup of coffee from the quaint little cafe upstairs in George Fisher; Abraham's Cafe. It really is a dangerous combination for the bank balance of outdoor enthusiasts like myself; a top quality outdoor store and a cafe in the same building!

Thank you once again to Ricky Lightfoot, the Salomon team and George Fisher for hosting a really special and very appreciated event.